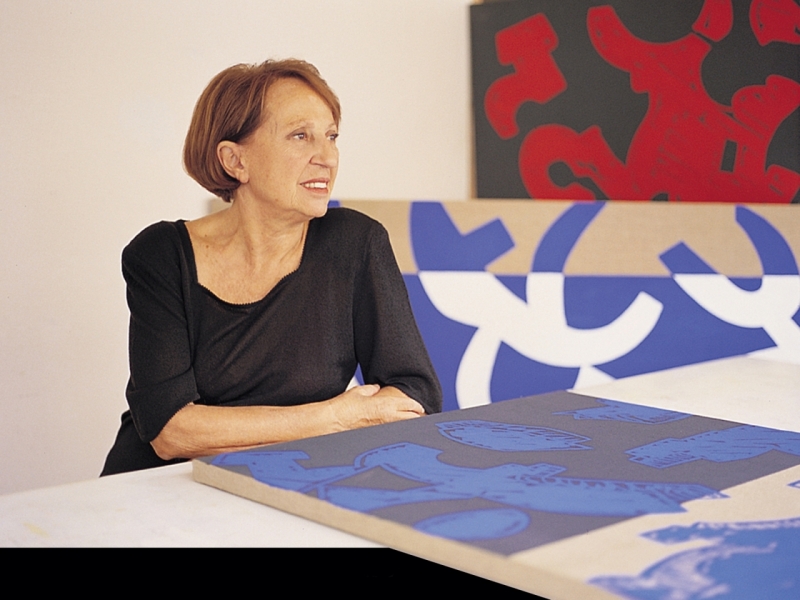 Carla Accardi - A systematic research and exaltation of sign and colour characterized for over half a century the artistic personality of Carla Accardi (Trapani 1924), one of the greatest exponents of Italian abstraction. In Rome since 1946,  the young Sicilian quickly comes to the attention of major critics as a protagonist of the group “Form” 1947 with Sanfilippo( her husband)Dorazio, Perilli, Consagro and Turcato. During the 50s,  in a non-formal climate, she proposed a free series of white signs on black backgrounds. Her conquest of luminescent colour dates from the 60’s when she was also influenced by her involvement in the feminist movement and her close relationship with her young student  Carla Lonzi. In 1964 her personal show at the Venice Biennale brings her to international attention. A constant work in progress pushes her beyond the flat surface of painting: she invents  spatial forms made of sheets of silicofoil covered with  brushstrokes of transparent colour. In the 70’s, a dialogue between the work of art  and space develops into TENTS, truly livable and mobile structures. Other materials are explored in the 80’s: rough canvases revealing chromatic layers of varying intensity. Other important exhibitions throughout the world consecrate the energy of her work shot through with Mediterranean light. Since 1998, Accardi designs objects and jewelry for the mark Valadier; precious objects that are indeed true works of art.