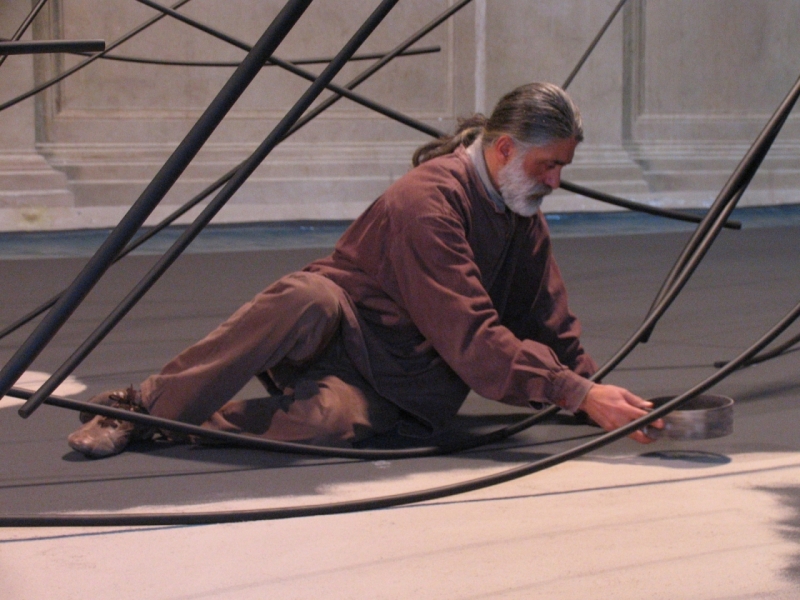 Roberto Almagno -  is one of the most vital and innovative Italian sculptors of his generation. Born in Aquino in 1954,he lives and works in Rome. He studied at the Academy of Fine Arts, Rome where he began to work on a new concept of space, charged with emotion yet centered on lightness and ascending tension- fundamental concepts for his future studies. Already in the 80s, Almagno works with only one material-wood, that he shapes with water and fire, polishing and curving it until he arrives at a delicate sign/object, ethereal and vibrant forms of extraordinary lyricism. A vocation and an almost craftsman-like knowledge remain the basis of his modus operandi; alongside this and almost in counterpoint is his vision that is capable of passing from examples such as Fazzini his memorable maestro, always an unforgettable part of him, and moving on to such great personalities such as Gonzales and Calder, Giacometti or Melotti. In addition he shows an intellectual affinity with certain aspects of Oriental culture in the confirmation of his vocation to the weightlessness of materials and the significance of signs. Almagno has been invited to participate in numerous prestigious exhibitions- for example the Roman Quadriennale in 1996 where he presented “Ashes” his first work to take on an environmental scope. Called by Valadier to create a line of sculpture-jewelry, he manages to transfer all the force of his signs even in the miniaturized measure of the precious object.